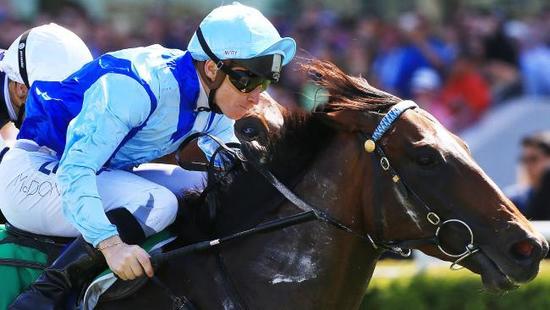 Knightsbridge are raising the price of Honorius to $11,000 inc GST in Australia for 2018.

"Next year we will not only be expanding our broodmare holdings but we will also dramatically upgrade our broodmares to much more commercial lines" John Heffernan the UK Manager of Knightsbridge said today, "demand in the Northern Hemisphere looks to be strong, even in the USA Turf racing is getting more and more attention, he added.

John Sikura's of Hill 'n' Dale has ingnited a new interest in US Turf racing, when he purchased part of Kitten's Joy he said, "Turf racing is an international currency, and all countries around the world honor their turf stars, and America is now moving in the direction of the rest of the world. There is one clearly superior turf sire in North America, and that is Kitten's Joy. We believe he has international appeal and is the type of sire who can breed the winner of any race from the Arc to the Breeders' Cup. Roaring Lion's win in the Royal Lodge Stakes has many calling him the best 2-year-old in England. Kitten's Joy will occupy what was Theatricals stall at our stallion complex."

Honorius will be staying at Larneuk Stud "we could not be happier with Larneuk Stud, we have everything there, broodmares, 2yos, foals and Honorius, looking after horses and raising horses requires absolute dedication and that is what Larneuk does to perfection" Issaree Suwunnavid CEO of Knightsbridge said.

Honorius Set to Produce Winners Around the World

Honorius has a good pedigree and the right traits to make him a good stallion. If his progeny follow suit then they should be able to race as two year olds, challenge for major classics as 3yo's and be durable and tough enough to be able to continue racing for many years.

He is a good addition to the stallion ranks and a horse that deserves following in the Northern Hemisphere throughout 2018.

As befitting a horse named after a Roman Emperor, Honorius is a horse of great style and presence and he is sure to impress breeders as he begins his stud career at Larneuk Stud, Euroa.

Honorius is a 7 year stallion with an impeccable pedigree and strong racing credentials that will prove to be popular in Australia, Hong Kong, Japan, Europe, UK and Singapore, a strong turf stallion that performed at the highest grade Honorius is set to be a future star.

Honorius is out of Irish mare, Zarinia, also dam of South African Champion and Horse Of The Year, IGUGU, winner of four Group 1 events and ten races in all.

He is by proven sire in both hemispheres, HOLY ROMAN EMPEROR, a Coolmore owned sire of ten individual Group 1 winners in seven different countries.

Including a tough fellow by the name of Honorius, a horse whose illustrious background demands attention! A proven high class sire line, an internationally prolific family… he has it all.