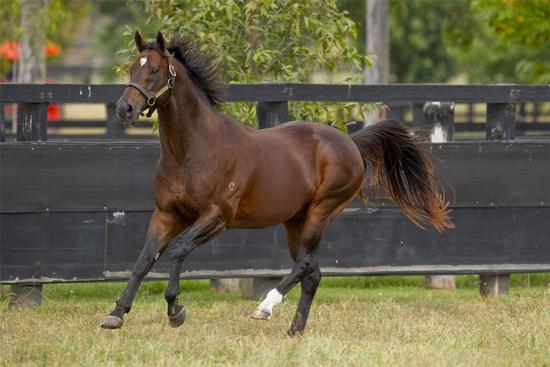 Memo from Redoute's Choice: "Don't sign off on the news out of a day's racing while I have a couple of stakes runners still to come."

The champion sire sent that message on Saturday evening, after the celebrations of Winx's three-peat Cox Plate victory, and after Snitzel's fourth big-track stakes double of the season.

As if to remind his champion son who still occupies the No. 1 box at Arrowfield's stallion quarters, Redoute's Choice summoned 3YO Perth filly Perfect Jewel and 2YO French filly Lilac Fairy into action.

Both fillies duly delivered, winning in the style of fillies likely to progress further this year.

She is the third stakeswinner from the Peters' wonderful broodmare Star Encounter (by Jeune), herself a Listed winner and also dam of Perth Cup G2 winner Star Exhibit and stakeswinner Royal Star, a year-older full sister to Perfect Jewel.

Richer prizes at Perth's upcoming Summer Carnival now beckon Perfect Jewel, nominated for the WA Guineas G2, and Royal Star, entered for the Railway Stakes G1. Both fillies are also among the nominations for the Kingston Town Classic G1 on 9 December.

Three hours after Perfect Jewel's win, around 10.30 pm Sydney time, Lilac Fairy lined up in the Prix des Sablonnets LR over 1600 metres at the picturesque course of Nantes in France.

Built very much on the mould of her famous sire, Lilac Fairy became stakeswinner No. 151 in good style, winning by a half-length from Mon Amie Chop & Shenoya, and fulfilling the promise she had shown in two runner-up finishes last month.

Bred by Guy Heald, Lilac Fairy is out of Border Bloom (by Selkirk) from the family of stakeswinner Dubai Rose and her Group 2-winning daughter The Juliet Rose.

She is the 37th juvenile stakeswinner by Redoute's Choice and the third stakeswinner, after Gold Luck & Ibiza, conceived during his two-season stint at the Aga Khan 's Haras de Bonneval.

Lilac Fairy was offered at the 2016 Arqana October Sale by Ecurie Monceaux and bought for €150,000 by Blandford Bloodstock and owner Golden East Horse. She is prepared by Francis-Henri Graffard, a graduate of the Darley Flying Start programme now making an impact as a trainer in France.

This same-day stakes double is the first for Redoute's Choice this season, but it's been a common feature of his career. In fact, he has recorded similar doubles in all but two seasons, 2003/04 (with one crop racing), and 2007/08.

Nadeem was also represented by a stakeswinner on Saturday, 2YO colt Sir Nate in the WRC Wellesley S. LR, while Burgundy, yet another son of Redoute's Choice, is the sire of ARC Soliloquy S. LR winner Dijon Bleu.