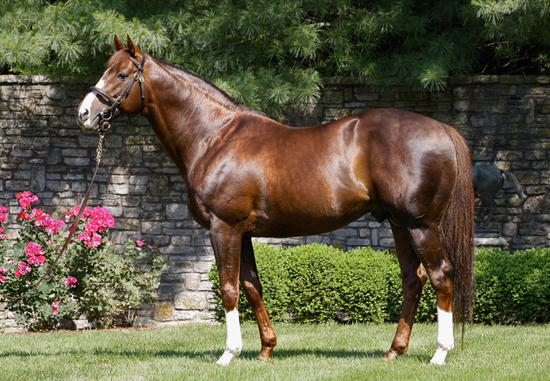 With lifetime earnings of nearly $160,000,000 Giant’s Causeway leads all active sires in North America bar none.

The only horse since Danzig to top the General Sires List on three occasions, he has also twice topped the 2YO table.

He is the sire of 31 Gr.1 winners worldwide.

Knightsbridge have 2 Giant's Causeway Mares now in Foal to Honorius at Larneuk Stud in Australia, Creative Song and Miss Moguls

A homebred for George Krikorian trained by Tim Yakteen, Multiplayer settled off the pace and surged to the line to win the one mile event on turf by a length and a quarter.

It was her second win from four starts with prizemoney now just shy of $100,000.

Multiplayer is the best of two winners from Style Squad, a daughter of Grade III winner Stylish.

She is the 175th stakes-winner for champion sire Giant’s Causeway, who also sired a debut juvenile winner at Belmont with Andina Del Sur (2f Giant’s Causeway x Andina, by Singspiel) scoring by two lengths for Thomas Albertrani over six furlongs.

Champion sire Giant’s Causeway had just three entries in Book One at the 2017 Keeneland September Yearling Sale and all were sold at an average $733,333.

His trio of fillies proved hot property with the top seller at $875,000 a filly from Grade I winner Hollywood Story that was bought by Mayberry Farm and consigned by Hill ‘n’ Dale Sales.

The filly is a half-sister to stakes-winner Miss Hollywood and three other winners.

Giant’s Causeway returned the third highest average of any sire in Book One.