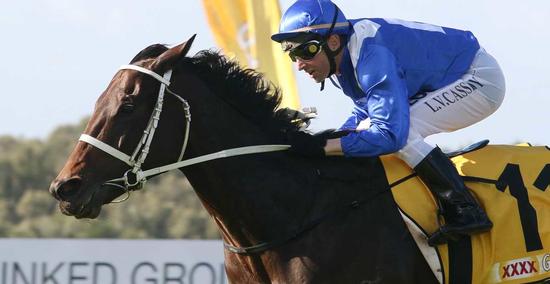 Graduates of Coolmore Australia enjoyed a stunning run of success through the three days of the Caulfield Spring Carnival.

On Wednesday Formality (Fastnet Rock), bred at Coolmore by Dr Kai Chah Tan, claimed her third group win of the Spring when taking out the Group III Blue Sapphire Stakes, with another Coolmore graduate, Lone Eagle (Zoffany), in third.

On Saturday the impressive series of results continued. Regally bred three year-old filly Pinot (Pierro) was raised at Coolmore and became the third generation of her pedigree to win in Group company when decisively capturing the Group III Ethereal Stakes.

"Knightsbridge recognize the value and quality of the Coolmore families," Knightsbridge CEO Issaree Suwunnavid said, "our stallion Honorius is by Holy Roman Emperor, we own mares by Galileo, Giant's Causeway and have sent mares to sons of Street Cry (Wolf Cry) and Fastnet Rock (Cluster)" she added.

“Mighty Boss and Catchy are already Gr.1 winners, but the race is on between the likes of Tulip (Pierro), Bring Me Roses (High Chaparral), Formality, Lone Eagle and Pinot to be the next Gr.1 winner from that crop. The results last week in particular were outstanding and I’ll never grow tired of saying how proud the team on the farm are of the success of these horses. An incredible amount of hard work goes into getting the balance right in terms of trying to breed elite racehorses, so the success is very fulfilling for all involved.”

“The impressive win of Pinot was a particularly gratifying result,” added Carey. “Her dam and granddam, Dizelle and Danelagh, both won Gr.1’s having been raised on the farm and hopefully Pinot can go on to emulate them.

“The pedigree is synonymous with her breeders Keith Biggs, John Jones and Rod Russell and hopefully she will become their next Gr.1 winner. They have been great patrons of Coolmore for many years and their success is well deserved,” concluded Carey.

Pinot’s sire Pierro enjoyed a hat-trick of winners on Saturday, with the Mick Price trained Plato breaking his maiden in good style before the Bob and Sandra Peters homebred Arcadia Prince showed promise of better things to come when scoring over 1400m at Ascot.

Just for good measure, another daughter of Pierro bred at Coolmore, Pierrocity, broke her maiden impressively over a mile at Te Rapa on today to continue the good run being enjoyed by Coolmore graduates.