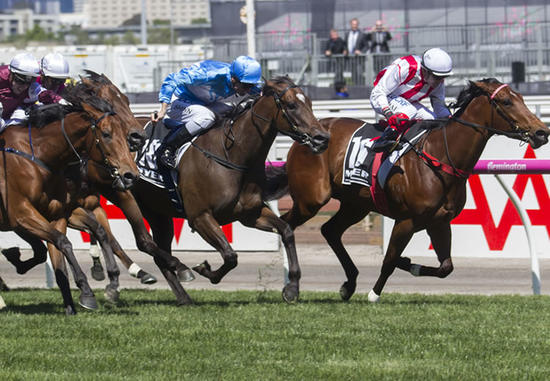 It was great to see Fastnet Rock continue to expand his legacy in Flemington over the weekend.

Fastnet Rock is the sire of Cluster, we have sent several mares to Cluster this year and are looking forward to some of his yearlings hitting the track in late 2018.

It only seemed fitting that a royally bred colt by champion sire Fastnet Rock should win the $1million Group I VRC Coolmore Stud Stakes at Flemington on Saturday.

Unbeaten in winning his first four starts, Merchant Navy (3c Fastnet Rock x Legally Bay, by Snippets) was sent to Sydney earlier in the spring for the Group I ATC Golden Rose, but endured a troubled run to finish tenth to Trapeze Artist.

Connections regrouped and while his trainer Ciaron Maher was sent to the sidelines as a result of suspension, Aaron Purcell stepped in to take over the colt and a new plan was formulated.

“We had a lot of discussion after the Golden Rose as to whether to go for the Guineas or Coolmore, which was ultimately thought to be the better option,” said Aaron Purcell, whose decision proved justified.

In a big field of 20, Merchant Navy was allowed to find his feet in the 1200 metre sprint and charged to the line along the fence for Mark Zahra to win by a head over high class fillies Invincible Star and Formality.

“I just waited and waited,” said an elated Mark Zahra.

“I thought I’d run out of time!

“It was a great decision not to go to the Guineas. They freshened him up, put the blinkers on and dropped him back in trip. It was great planning from Aaron Purcell and his team.”

With five wins from six starts and prizemoney just shy of $1million, Merchant Navy is raced by a syndicate that includes Darren Thomas’s Seymour Bloodstock, who tasted success earlier in the day when winning the Group III VRC Carbine Club Stakes with Pierro colt Levendi.

“There’s a great bunch of owners in this horse including Peter O’Brien (Segenhoe) and the Coolmore boys,” Thomas said.

“I’m speechless. To have a winner earlier in the day and now this, it’s just awesome!”

Bred by Chris Barham and foaled and raised at Segenhoe, Merchant Navy is one of six winners from the good producing Snippets Group III winner Legally Bay, a half-sister to Group I winner Bonaria, who won the VRC Myer Classic on this day in 2014.

Prepared by Anthony Freedman, Shoals finished second in the Group I MRC Thousand Guineas at her previous start to Aloisia and was well fancied to give the older mares a run for their money.

Shoals was ridden forward from gate 10 by Dean Yendall, who won the race last year on three year-old filly I Am a Star.

He was able to repeat his performance, driving the filly to the front after turning for home and holding off all challengers to win the 1600 metre feature by a short half head over I Am Invincible mare Eckstein.

“I pushed the button a bit early, but I knew I had a 7kg pull in the weights. It was a massive effort.”

Shoals has the impressive record of five wins and two seconds from seven starts with prizemoney topping $1million.

“We decided to keep something up our sleeve for this race. She was incredibly tough today. There’s no reason she can’t win a few more Group One’s.”

A metropolitan winner by Hussonet, The Broken Shore is a half-sister to Group I winners Redoute’s Choice, Manhattan Rain and Platinum Scissors as well as Group III winner Sliding Cube and stakes-winner Echoes of Heaven.

The Broken Shore has been to Fastnet Rock in three seasons running and her current two year-old filly, a full sister to Shoals, is called Tides and will also be trained by Anthony Freedman.

The 31st Group I winner for Fastnet Rock, Shoals brought up a Group I double for her champion sire, who also tasted success at in the $1million VRC Coolmore Stud Stakes with exciting colt Merchant Navy.