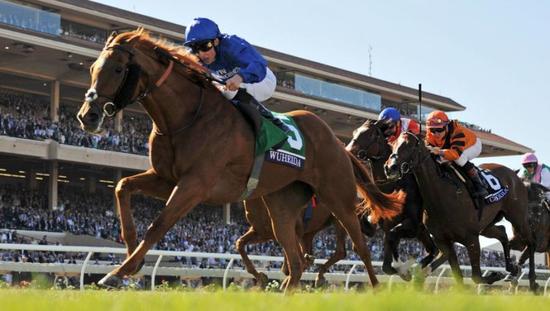 Dubawi has been having great success lately and Wuheida is the latest Group 1 winner for the Champion Stallion. Dubawi has been delivering strong results in the sales ring and on the track, that is very encouraging for Knightsbridge as their Dubawi mare Isabel Street has had a very nice filly this year by Frankel's 3/4 brother Bullet Train and is now in foal to Larneuk Studs Wolf Cry (Street Cry).

Wuheida came good on her fifth start of the year with a brilliant victory in the nine-furlong G1 Breeders’ Cup Filly & Mare Turf at Del Mar, USA, on Saturday, 4 November.

Ridden by William Buick, enjoying his first Breeders’ Cup success, the three-year-old daughter of Dubawi broke smartly and was soon settled in third of the 14 runners towards the inner.

Wuheida maintained her position before going smoothly into second turning for home and led entering the straight.

She was asked to go clear and soon gained a two-length advantage, passing the post a length ahead of the runner-up Rhododendron in 1m 47.91s on firm ground.

It was a second G1 success for Wuheida, who took the mile Prix Marcel Boussac at Chantilly France in October last year.

Charlie Appleby, celebrating his second Breeders’ Cup win, said: “Thanks to everybody.

“I have a great team behind me. Firstly, thanks His Highness Sheikh Mohammed for giving me this position and enabling me to be here.

“Wuheida deserves this success – we were a bit unlucky yesterday and did not get the rub of the green (with Masar) and then we were touched off earlier today (with Sound And Silence).

“But I knew the horses were in good order. William has given Wuheida a peach of a ride – his only instructions were to let Wuheida spin around.

“When they went into the first turn, I knew they were in the right position – the fractions were all going right for us as well and Wuheida is a strong finisher.

“William angled her out in the straight and got first run on everything. I am delighted for Godolphin.”

“It was just a minor hiccup thankfully which caused her to miss the G1 Queen Elizabeth II Challenge Cup at Keeneland last month.

“Charlie was happy with her right through this week and Wuheida acclimatised really well to Southern California. And, as you have seen today, she was on her best form. We are very proud of the filly. It is a huge, huge win for us all.

“William is a world-class jockey and part of a broader Godolphin team around the world. To William and Charlie in particular, this is a job well done and we are proud have this win for His Highness Sheikh Mohammed.”

William Buick said: “This victory means everything to me – it is very special.

“Wuheida is a fantastic horse to ride. The ground has gone against her a lot this year before today.

“She broke well, which is very important of course, and I was always very comfortable. She has won well. They went a good solid gallop which suited her as she is probably more of a mile and a quarter filly.

“Charlie has done a fantastic job conditioning her and, from a long way out, he targeted this race for her. He is a great trainer and he gives me plenty of confidence. It is perfect and I am just so, so happy.

“It is a game of ups and downs – as you have got more ups than downs then it is good. “I have had plenty of goes at the Breeders’ Cup and it wasn’t successful, so to ride my first Breeders’ Cup winner means everything.

“It is a big team effort and thanks go to everybody. I am just delighted for everybody in the team.”