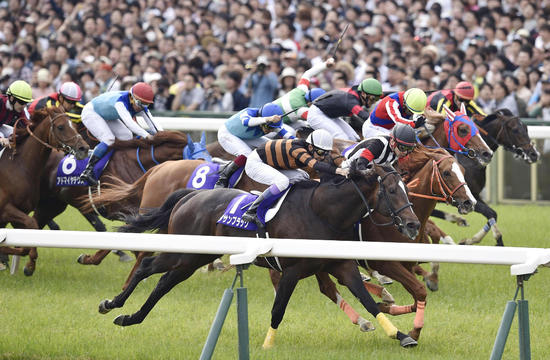 Four foreign runners have accepted their invitations to run in the 2017 edition of the Japan Cup (G1, 2,400m) on November 26 at Tokyo Racecourse. Idaho (IRE, C4, by Galileo) guided by top Irish trainer Aidan O’Brien is a two-time group-two winner who also finished third in the King George VI and Queen Elizabeth Stakes (G1, 2,400m) in July. Iquitos (GER, H5, by Adlerflug) from Germany will make his second challenge for the Japan Cup title after finishing seventh last year. The son of Adlerflug marked his second group-one victory this year in the Grosser Dallmayr-Preis (G1, 2,000m) and is coming off a runner-up effort in the Grosser Preis von Bayern (G1、2,400m). Another German-trained runner contesting the race this year is Jean-Pierre Carvalho-trained Guignol (GER, H5, by Cape Cross) who captured his second straight victory in the Grosser Preis von Bayern and also won the G1 Grosser Preis Von Baden (G1, 2,400m) in September. Boom Time (AUS, H6, by Flying Spur) is coming off a 15th-place finish in the Melbourne Cup (G1, 3,200m) after an upset victory in one of Australia’s most competitive G1 events, the Caulfield Cup (G1, 2,400m). He is trained by David Hayes, who will appear in his third Japan Cup after giving Australia its first title with Better Loosen Up (AUS, by Loosen Up) in 1990 and then marking a sixth-place finish with Jeune (GB, by Kalaglow) in 1994.

The Japanese runners of this year’s Japan Cup will no doubt center on whether last year’s winner Kitasan Black (JPN, H5, by Black Tide) can capture the title for the second consecutive year. Kicking off his 2017 season with a G1 victory in the upgraded Osaka Hai (2,000m), the Black Tide (JPN, by Sunday Silence) entire defended his Tenno Sho (Spring) (G1, 3,200m) title but then failed in his third G1 start this year, the Takarazuka Kinen (G1, 2,200m), disappointing to ninth in a field of 11. In mid-October, his connections announced he would retire after three possible G1 starts in the Tenno Sho (Autumn) (G1, 2,000m), the Japan Cup and the Arima Kinen (G1, 2,500m).

Kitasan Black’s fall debut in the Tenno Sho (Autumn) on October 29 focused on how well he bounces back after his unexpected defeat in the Takarazuka. The race was held under heavy rain and very soft track conditions due to an approaching typhoon, so the winning time was 10 seconds slower than the average time over firm going. Kitasan Black missed his break and was positioned much farther back than usual but gradually made ground along the inside, advanced close to the leaders in third before the final corner, assumed command soon after entering the straight and fended off a late charge by Satono Crown for a neck victory. With his sixth career G1 win, Kitasan Black surpassed Deep Impact (JPN, by Sunday Silence) in career earnings to stand second only to T. M. Opera O (JPN, by Opera House), and a victory in the Japan Cup would place the two in a tie for all-time most career G1 wins on turf.

Satono Crown (JPN, H5, by Marju) claimed his second G1 title in the Takarazuka Kinen in June, following a triumph in the Hong Kong Vase (G1, 2,400m) last December. He showcased his skill over soft going in his fall debut, the Tenno Sho (Autumn), where he closed in impressively and just missed by a neck. The 13th favorite, Rainbow Line (JPN, C4, by Stay Gold), finished third in one of his best G1 performances since finishing runner-up in last year’s Kikuka Sho (Japanese St. Leger, G1, 3,000m), whereas many of his rivals struggled to handle the slow track. 2016 Derby winner Makahiki (JPN, C4, by Deep Impact), who finished fifth, remained winless since his victory in the Prix Niel (G2, 2,400m) last year, but is hoped to claim his second G1 title in the Japan Cup on the same track and distance as the Tokyo Yushun (Japanese Derby, G1, 2,400m).

Soul Stirring (JPN, F3, by Frankel) won the Yushun Himba (Japanese Oaks, 2,400m), the second leg of the Triple Crown for three-year-old fillies, to register her second G1 title following the 2016 Hanshin Juvenile Fillies (1,600m). She then passed up the Crown’s third leg to face a mixed field of older grade-race runners in the Mainichi Hai (G2, 1,800m) on October 8 but finished worse than fourth for her first time. Next, in the Tenno Sho (Autumn) against top G1 runners, she was well beaten by almost 10 lengths in sixth. However, considering the time and energy she used running wide on a heavy track, she could do well if in form in the Japan Cup.

Other runners coming off the Tenno Sho (Autumn) to the Japan Cup are seventh-place and four-time graded victor Decipher (JPN, H8, by Deep Impact), 11th-place and five-time grade-race winner Yamakatsu Ace (JPN, H5, by King Kamehameha), 15th-place and this year’s Nikkei Sho (G2, 2,500m) champion Sciacchetra (JPN, C4, by Manhattan Cafe), and 17th-place and 2014 Tokyo Yushun victor One and Only (JPN, H6, by Heart’s Cry). The key to success in the Japan Cup for Tenno Sho (Autumn) entries will be how quickly they can recover from laboring in a race won in 2:08.3 – the slowest time since the race was reduced to 2,000 meters.

Cheval Grand (JPN, H5, by Heart’s Cry), third in the Japan Cup last year, continues to be a strong candidate. In the Tenno Sho (Spring) in April, he was second to race-favorite Kitasan Black and a neck ahead of near-favorite Satono Diamond (JPN, C4, by Deep Impact). The Heart’s Cry (JPN, by Sunday Silence) horse failed to maintain his bid after setting the pace in the Takarazuka Kinen, finishing eighth, but bounced back to finish third in his fall debut, the Kyoto Daishoten (G2, 2,400m) on October 9. He hopes to build on this race and take his time in training to prepare for the Japan Cup.

Tosen Basil (JPN, H5, by Harbinger), 11th in the Japan Cup last year, scored his first runner-up effort in a grade race, 1/2 lengths behind Smart Layer (JPN, M7, by Deep Impact), in the Kyoto Daishoten and appears to be in improved form towards the Japan Cup this year. In the same race, 2015 Japan Cup runner-up Last Impact (JPN, H7, by Deep Impact) was sixth, 0.5 second behind the winner, remaining winless for almost three years. 2016 Japan Cup runner-up Sounds of Earth (JPN, H6, by Neo Universe) also ran in the Kyoto Daishoten but disappointed to 13th and has been under par throughout this season.

Tanta Alegria (JPN, H5, by Zenno Rob Roy) is a talented five-year-old with plenty of stamina, having finished fourth in both the 2015 Kikuka Sho and the 2016 Tenno Sho (Spring). However, the injury-prone son of Zenno Rob Roy (JPN, by Sunday Silence) was sidelined after first grade-race victory in the American Jockey Club Cup (G2, 2,200m) in January due to a splint. He made his comeback start on September 24 in the All Comers (G2, 2,200m), finishing third and nearly winning if not for a disadvantageous last corner.

Tokyo Yushun winner Rey de Oro (JPN, C3, by King Kamehameha) kicked off his fall campaign in the Kobe Shimbun Hai (G2, 2,400m) on September 24, where he showed versatility by deploying a different racing style close to the pace, making an early move at the top of the stretch and drawing away for a dominating two-length victory. Although the G2 event was as a trial for the Kikuka Sho, the son of King Kamehameha (JPN, by Kingmambo) opted to pass up the third leg of the Triple Crown to take a short break before returning to training in late October.

Tokyo Yushun runner-up Suave Richard (JPN, C3, by Heart’s Cry) took time recovering from his spring campaign before returning to training in October and then making his fall comeback against seniors in the Copa Republica Argentina (G2, 2,500m) on November 5. He gave a dominating performance, coming from mid-field to score a 2-1/2-length victory as the race’s first three-year-old winner in 20 years. The Japan Cup and the Arima Kinen were among the primary choices for his next destination, with the latter appearing to have won out. Kiseki (JPN, C3, by Rulership) was defeated to second behind Rey de Oro in the Kobe Shimbun Hai, after which the Rulership (JPN, by King Kamehameha) colt promptly won the Kikuka Sho. His connections were pointing him towards the Japan Cup if he could recover from the race’s heavy track condition, which resulted in a winning time of 3:18.9 over 3,000 meters, the fifth slowest on record. Eventually, however, they decided to allow him more time by pointing towards the Hong Kong Vase (G1, 2,400m) on December 10.