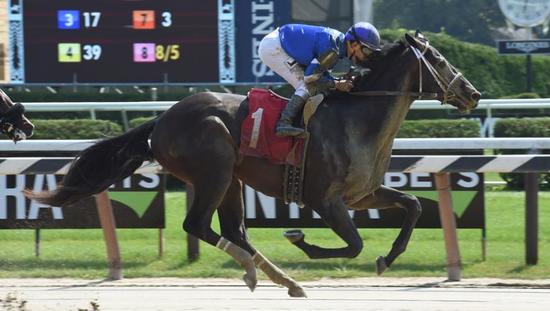 Enticed came through to gain a gutsy victory in an exciting finish to the G2 Kentucky Jockey Club Stakes over an extended mile on dirt at Churchill Downs, USA, on Saturday, November 25

The two-year-old Medaglia d'Oro colt, trained by Kiaran McLaughlin and ridden by Junior Alvarado, has always been well regarded and he built on his first two starts to win the 14-runner race.

Enticed impressed when taking a six-furlong maiden on debut at Saratoga on September 4, quickening powerfully in the final furlong.

He then performed with tremendous credit in the 12-runner G1 Champagne Stakes over a mile on October 7 at Belmont Park on his second start, rallying for third behind the winner Firenze Fire and subsequent G1 Breeders' Cup Juvenile victor Good Magic.

Tonight’s race was a rough one and Enticed was bumped on the first turn but he recovered to race third. Then fifth and fourth, he swung widest into the straight to make his challenge and wore down the runner-up Tiz Mischief close home to triumph by a head in 1m 44.42s, with two and a half lengths back to the third Promises Fulfilled.

Jimmy Bell of Godolphin commented: “We are very, very pleased with Enticed.

“Most horses cannot break their maiden first time out like he did and then he ran very well to finish third in the Champagne Stakes, which has turned out a formful race, with the second Good Magic winning the Breeders’ Cup Juvenile.

“This evening under lights was all new to him, as was getting bounced around and maintaining his balance on the first turn. He has handled everything and gained a lot of experience.

“Enticed has ticked a lot of boxes this evening and shown a lot of positives signs, which will benefit him when racing against the best next year.

“He will go on vacation to Florida now and we will discuss what to do next. He is a homebred for Sheikh Mohammed. Medaglia d’Oro is a great stallion and the mare It’s Tricky, who raced for Godolphin, was a multiple G1 winner.”

Enticed earned 10 qualifying points towards the 2018 Kentucky Derby with the win.