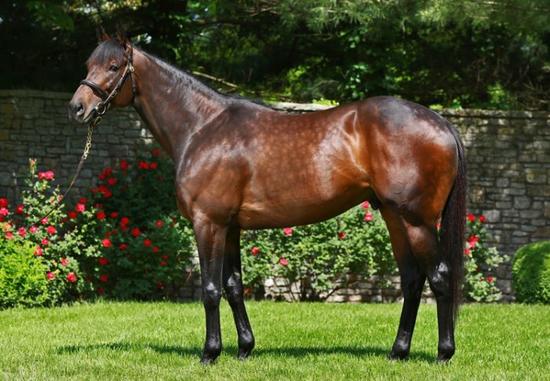 Knightsbridge acquired and Uncle Mo Colt prior to the sale and have the horse at Larneuk Stud and then he will be sent up to Terry Evans, “we thought Uncle Mo would bring big money at the sale so we decided to get in early,looks like that decision really paid off” Joe Heffernan said from the Magic Millions sale, “it has been an incredible sale for Coolmore stallions, they really are producing some high quality horses.” he added.

2 New Graded Stakes Winners in USA on the Weekend

Grade placed on numerous occasions including third placings in the Grade I Starlet Stakes and La Brea Stakes, Mopotism was long overdue to break through with a big win of her own.

Trained by Doug O’Neil and ridden by Mario Gutierrez, Mopotism did best in a driving finish to win the one mile $201,035 Grade II La Canada Stakes at Santa Anita by a head.

A $300,000 Fasig Tipton 2YO Sale purchase, she runs for Reddam Racing and has the overall record of three wins and six placings from 15 starts with prizemoney of $561,200.

“You know, I watched it live and at first I thought she got there but then I saw the replay and thought, ‘oh no! She got bobbed,” J. Paul Reddam said.

“I think she was lugging in a little too there so I think it was harder to push by. It was nice to end up on the right side of the photo but I also felt bad for the mare we beat, Mended [a $12,500 claimer on a 10-race win streak]. She’s a great story. She raced her guts out.”

Mopotism is the 37th stakes-winner for Uncle Mo and is the first winner from Peppy Rafaela, a half-sister to Grade II winner Songster.

Already a stakes-winner Ultra Brat, upped the ante when taking out the $150,000 Grade III Marshua’s River Stakes at Gulfstream.

Trained by Graham Motion, Ultra Brat was a two time stakes-winner previously, but produced her best work here to win the 1 and 1/16th mile turf contest by a length and three-quarters.

It was a great return to form for Ultra Brat who was having her second run back after a long 11 month layoff.

“I don’t think we had a specific issue,” Graham Motion said in reference to her time away from racing.

“She just had like nagging problems and we gave her a break, and it just took her a little longer to get back to the races than I thought. It looks like it worked out pretty well. The one thing Nik said was that he just wanted her relaxed because she was pretty keen last time sprinting. But it set up well today. She likes this track. It obviously suits her.”

A homebred for Alex Campbell, Ultra Brat has won five of 11 starts earning over $272,000 in prizemoney and is a half-sister to Grade III winner It’s Tea Time from Prof McGonagall, who has a yearling colt by American Pharoah.