The Lonhro Family is Going Strong 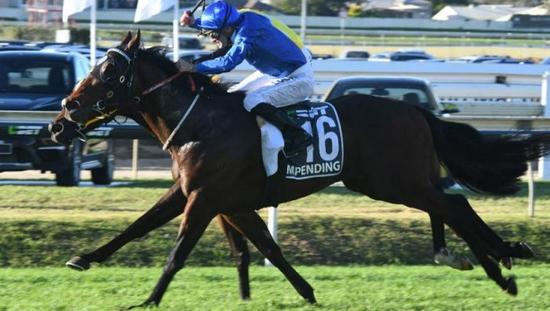 A homebred for Waratah Thoroughbreds, lightly raced Commander (2g Pierro x Ephemera, by More Than Ready) cast off maiden status with a resounding win in the Listed BRC The Phoenix Stakes at the Sunshine Coast on Saturday.

Trained by John Thompson, he was sixth on debut to boom colt The Autumn sun on debut at Randwick on ANZAC Day before finishing a close second at Warwick Farm over 1400 metres on May 19.

Stepped up in distance to 1600 metres for his first attempt at Black Type, Commander raced up on the pace for Dean Yendall and powered away to win by two lengths.

Commander is among entries for the Group I BRC JJ Atkins Stakes next Saturday, but John Thompson was not ready to commit the promising gelding to a start and will discuss the option this week with his owner Paul Fudge of Waratah Thoroughbreds.

“He is in the race and he showed today that 1600m is no problem. He likes to get his toe in the ground on wet tracks so that’s a plus as well,” Thompson said.

“I think he will eventually get at least 2000 metres.”

Commander is the second foal and second winner for stakes-placed More Than Ready mare Ephemera, that was bought by Waratah Thoroughbreds from the Inglis Australian Easter Yearling Sale in 2011 for $525,000.

Ephemera is a half-sister to Group II winner Running Tall from a US family that features Group I winner and Champion US 2YO Midshipman and multiple Group I winner Frosted.

For further information on O’Lonhro who stands alongside exciting youngsters Wolf Cry, Cluster and Honorius, contact Neville Murdoch on 0418 105 706 or visit www.larneuk.com

Epidemic established herself in what is becoming an illustrious family when she successfully stepped up to Stakes company in Saturday’ Listed Helen Coughlan Stakes at Queensland’s Sunshine Coast.

The sister to dual G1 winner Impending had won restricted races at her previous two starts and showed she was a filly with a future with a victory achieved against the prevailing track conditions.

A daughter of Darley’s ever-reliable stallion Lonhro and the two-time G1 winner Mnemosyne who was also raced by Sheikh Mohammed, Epidemic is a sister to Impending, who a week earlier won his second G1 in the Godolphin colours.

While Impending is the star of the family, Epidemic showed she was a worthy member with a win that seemed unlikely with 50m to run.

“She’s such a determined filly, she really knuckled down and finished it off,” said assistant trainer Paul Reid.

“With that win she’s really created a future for herself.”

From an unsuitable inside gate Epidemic settled in midfield and in the worst going.

Coming to the home turn she slipped through inside several runners and at the 200m set out after the leader Pomelo.

Cassidy was unable to get to the better ground and Epidemic had to draw on previously unexposed ability to get the better of Pomelo and win by a head.

“She’s got a lot of quality, she’s strong and she’s got a great will to win,” Cassidy said.

“We got stuck close to the inside, so it was an even better effort than it might have looked.”

As well as adding to her own record, the win enhanced that of Impending who has the final run of his career in next week’s G1 Stradbroke Handicap before joining his sire Lonhro at stud.