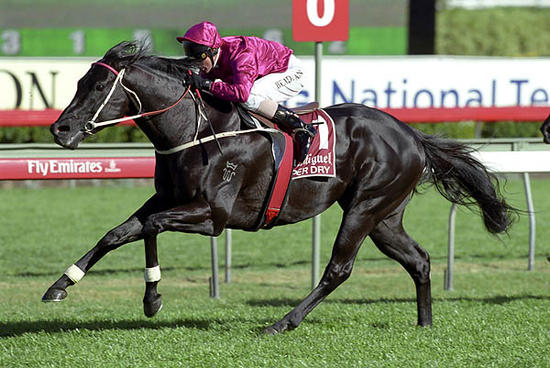 Legendary Australian Racehorse Lonhro is making his mark around the world.

Lonhro was an incredible performer

As Godolphin’s multiple G1 winner Impending goes to stud this spring, he brings with him an outstanding racing record, a magnificent pedigree and the looks and style of a ready-made stallion.

Born with the right credentials, Impending lived up to them from the start.

Impending is by Lonhro, the champion racehorse of his era in Australia and a stallion who is one of the country’s most reliable producer of winners.

He is from the Encosta De Lago mare Mnemosyne, whose six wins included the G1 Flight Stakes and G1 Thousand Guineas. Mnemosyne is one of seven winners from as many foals produced by her dam My Juliet (Canny Lad) and has herself produced three Stakes winners, including the highly-promising filly Epidemic (Lonhro).

It is a family that also includes the outstanding racemare Better Draw who at stud produced the G1 Golden Slipper winner Full On Aces and his brother Top Of The Pack.

“From any point of view there is a lot to like about Impending,” said Cummings.

“He has so much to pass on, he’s such a strong, well-built colt with a wonderful temperament, a great desire to win and a blistering turn of foot.”

As a racehorse Impending showed his talents right from the beginning, winning at his first start as a two-year-old and then stacking up Stakes placings at his next three starts before winning the G2 Stan Fox Stakes in the spring of 2016.

Impending was prepared for that win by Darren Beadman, a seven-time champion jockey in Sydney and a long-time assistant trainer with Godolphin.

“My history with Impending and his family goes back a long way ….. to train him as a G1 racehorse was the ultimate, a highlight of my career,” Beadman said.

Impending began his four-year-old career in the spring of 2017 under the care of Cummings, with the best of his two runs for the preparation a third placing in the G1 Darley Classic at Flemington.

The colt’s final preparation kicked off with a victory in the G2 Victory Stakes at Doomben which was followed by an unlucky second in the G1 Doomben 10,000 before his brilliant success in the G1 Kingsford-Smith Cup.

“If his progeny inherit his looks and his walk, yearling buyers are going to be all over them.”

Impending retires to stud with a record of five wins and eight placings from 18 starts and prizemoney of almost A$2.5 million.

He will stand at Darley’s Northwood Park stud in Victoria at a fee of A$22,000, including GST.

6 winners in 3 days and 4 winners today.

For further information on O’Lonhro who stands alongside exciting youngsters Wolf Cry, Cluster and Honorius, contact Neville Murdoch on 0418 105 706 or visit www.larneuk.com