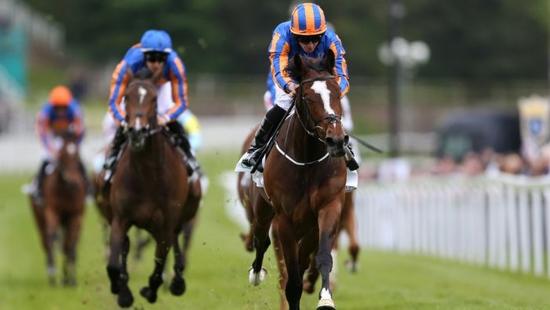 Further underlining the quality of a selection that hails from the top French and European nurseries, this year has seen a plethora of exciting performances from previous graduates, not least 2016 sales topper MAGIC WAND who captured the Gr.2 Ribblesdale Stakes at Royal Ascot last week in dazzling style.

She joins the ARQANA Yearling Sales’ Hall of Fame with other past graduates such as 2017 Epsom Derby winner WINGS OF EAGLES, Hong Kong champion PAKISTAN

STAR, the winner of two Gr.1 races this season and Horse of the Year; Gr.1 Jenny Wiley Stakes heroine SISTERCHARLIE, as well as the talented sprinter CITY LIGHT, who thrilled all of France when just going down in the Gr.1 Diamond Jubilee Stakes last Saturday. Also at the Royal Meeting, fellow ARQANA yearling purchase TORCEDOR, trained in Ireland for the New Zealand colours of Te Akau Racing, put up an outstanding performance when third in the Gr.1 Ascot Gold Cup.

In France, OLMEDO and TEPPAL scored a Classic double for ARQANA when winning the Gr.1 Poule d’Essai des Poulains and Poule d’Essai des Pouliches at ParisLongchamp, while BARKAA, DICE ROLL, INTELLOGENT, PHARRELL and YOUNG RASCAL have each won Classic trials on either side of the English Channel.

No less than 345 yearlings will try to follow in their footsteps when they go under the hammer from August 18 to 20 in Deauville.