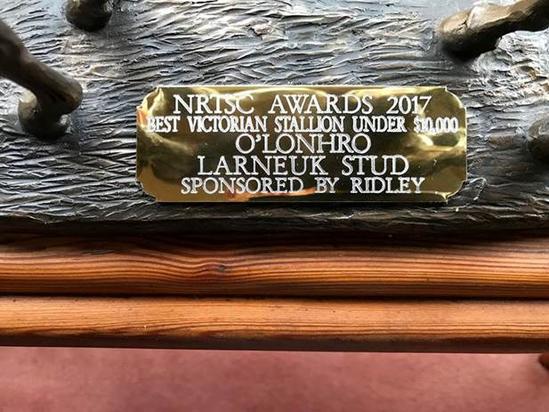 Larneuk Stud‘s Neville Murdoch has always been proud of his underrated consistent stallion O’Lonhro – all the more so when the quite achiever was recognised at last week’s Northern Region Thoroughbreds Awards.

Earning the title of “Best Victorian Stallion Under $10,000,” O’Lonhro was recognised for the great job he has been doing for those in the owner/breeder market.

72% of O’Lonhro’s runners for this season have won or been placed and on Wednesday at Doomben’s big Ekka meeting he was represented by another new winner with the Chris Munce trained Skyscraper impressive claiming his maiden.

Jumping straight to the front, the four-year-old never looked in any danger of defeat, pinning his ears back and racing away to salute by a soft 1 1/4 lengths.

“He is a solid galloper,” Munce said. “It was only his third start and he will keep improving. I thought the blinkers on today would help him focus and he showed that he has got a great will to win.”

“He showed ability when we first got him as an early three-year-old and he has come ahead in leaps and bounds since.”

Just a few days earlier O’Lonhro had another nice type in the winner’s circle, the Terry & Karina O’Sullivan trained Elle O’Love looking the goods breaking through at Coleraine.

Having just her third start, the promising four-year-old shared the lead before getting clear from the 100m and looking to have plenty in hand with her 3/4 length victory.

So many of the O’Lonhro breed show good natural pace – they are tough, sound competitors who put themselves in the firing line and try hard.

“Honesty is a trait of Lonhro and his progeny so it is no surprise to see O’Lonhro siring such consistent and durable gallopers,” Murdoch said.

No Tan Tat (a home-bred for Larneuk), Franquin, Je Suis Prest, The Mood I’m In, Mamzelle Tess and O’Spacehello – all genuine horses who really know how to find the line – are other recent good performers for O’Lonhro.

An imposing near black stallion built very much in the mould of his eleven times Group One winning sire (sire of 68 stakes winners), O’Lonhro won the Gr.2 Chelmsford Stakes (a race also won by Lonhro on two occasions) in record time.

He has been siring winners out of a wide range of mares and has been represented by winners in Australia, Malaysia and Singapore.

For further information on O’Lonhro who stands alongside Cluster, Ilovethiscity, Honorius and Wolf Cry contact Neville Murdoch on 0418 105 706.

Kristen Manning is a freelance racing writer and pedigree analyst based in Melbourne. A keen owner/breeder who loves every aspect of thoroughbred horse racing, she has written two books focusing on the deeds of Fields Of Omagh and Prince Of Penzance.