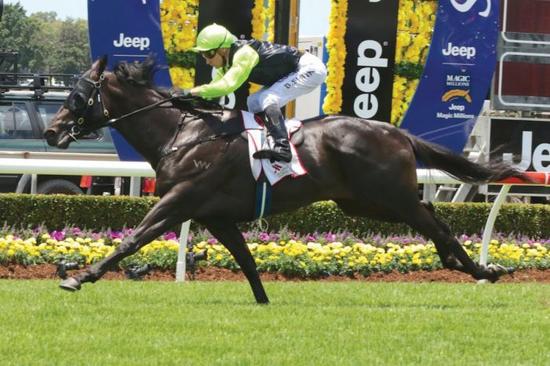 While the mighty stallion Street Cry (IRE) is no longer with us, we do have the legacy of his exceptional daughter Winx and his sire son Wolf Cry, who makes his debut at Larneuk Stud this spring.

It is hard to tell Wolf Cry and Street Cry apart in photos, Wolf Cry is the spitting image of his sire.

“He ticks all the boxes,” said Neville Murdoch of Larneuk Stud.

“He is a magnificent type who is bound to impress all who see him, he has a great pedigree from a family well known to Victorian breeders and he had plenty of natural ability.”

Wolf Cry’s pedigree is one of great appeal. His sire Street Cry has been an international sensation represented by 100 plus stakes winners, 20 of whom are Group I winners including Winx, Zenyatta, Whobegotyou and Pride Of Dubai.

Already his sons are proving their worth at stud, Per Incanto, Shocking, Street Boss and Street Sense all siring Group I winners.

Bred on the same highly successful Street Cry/Danehill cross as the big race winners Shocking, Pride Of Dubai, Hallowed Crown, Stay With Me and Politeness, Wolf Cry is out of Starfish, a regally bred daughter of champion stallion Redoute’s Choice.

Starfish is a daughter of the Group I sprinting mare Stella Cadente, dam of three black type performers including the juvenile stakes winner Brilliant Bisc, who produced a $1million yearling colt at Inglis Easter this year sired by Written Tycoon.

This is one of Australia’s favourite families, one that has also produced the Golden Slipper heroine Bint Marscay, the Epsom Handicap/Caulfield Stakes winner Filante, the Coolmore Classic winner Bollinger, the VRC Derby winner Benicio and the Australian Guineas winner Kenny’s Best Pal.

Wolf Cry’s pedigree page is one full of black type, his other relations including the stakes winners Eau D’Scay, Sheraton, Always Allison, Romneya, Friesan Fire and At The Oasis.

Wolf Cry makes his stud debut at a fee of $4400 (incl gst) with Neville Murdoch confident that he will be of great appeal to broodmare owners.

“He has early form which makes him in an outstanding VOBIS prospect and his progeny will certainly be strong contenders for the lucrative money on offer in the VOBIS Sires two and three-year-old races.”

“He is such a sensational type that he is bound to upgrade his mares.”

For further information on Wolf Cry who stands alongside Cluster, Ilovethiscity and O’Lonhro, contact Neville Murdoch on 0418 105 706 or visit www.larneuk.com and www.facebook.com/pages/Larneuk-Stud/455896497806590