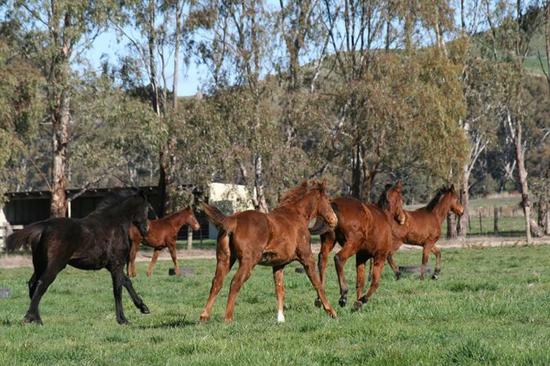 Neville Murdoch was busy in the paddocks of Larneuk Stud on Wednesday evening, a Cluster (FASTNET ROCK) colt and a Toronado filly arriving not long after dinner – not giving him too much time to celebrate a Flemington winner!

Murdoch is the happy owner of Success Express mare Rapid Sensation whose son I’m Telling Ya was so impressive down the straight taking out the Wallace Handicap for the Amy Johnston stable.

Settling last from the outside gate, the chestnut was patiently handled by Damian Lane who had Johnston’s instructions firmly in mind – this horse is not to be whipped!

“He absolutely hates it,” Johnston said, noting that it is difficult for a jockey not to reach for the persuader – “it is instinct. But he just doesn’t need it, he is already trying and his form has improved since we’ve stopped using it.”

Excited to win a Flemington race – “I love him, I’m thrilled,” she enthused, Johnston described I’m Telling Ya as “a superior straight horse.”

“He absolutely relishes it. He has raced well in higher rated races here and this race could not have been more perfect for him. I saw it a while ago and drew stars around it in the calendar, I couldn’t wait for it!”

Hoping that the four-year-old will rise a few points in ratings, Johnston is keen to campaign the son of Blue Diamond winner Reward For Effort over the spring – “there might be a nice race for him during the carnival,” she said.

Damian Lane, who said that “Amy and her team have done a terrific job with this horse,” was happy with the will to win displayed by his charge – “he gave me his all and flew home.”

Still last with 250m to go, I’m Telling Ya weaved his way through the field, hitting the lead close to home.

Sold by Larneuk at the 2015 Inglis Melbourne Premier Yearling Sale, I’m Telling Ya is a half-brother to the city placed three times winner Social Media. Their dam was served last spring by Kuroshio having produced an Ilovethiscity colt.

A stakes placed dual city winner (second to Romneya in the Group Three Vanity), Rapid Sensation is out of a half-sister to the Listed winner Momentaire from the family of Group One sprinter Under The Louvre.

Kristen Manning is a freelance racing writer and pedigree analyst based in Melbourne. A keen owner/breeder who loves every aspect of thoroughbred horse racing, she has written two books focusing on the deeds of Fields Of Omagh and Prince Of Penzance.