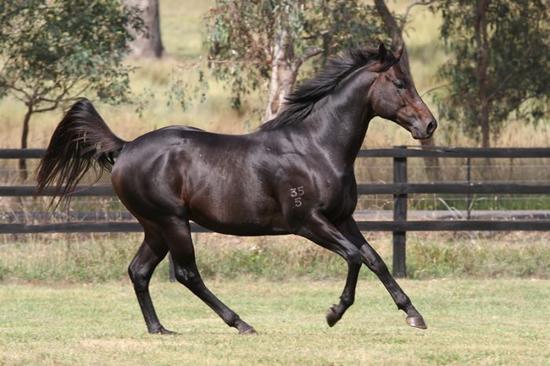 Larneuk Stud based O’lonhro scored a treble on the weekend with winners in Queensland, Tasmania and Victoria.

On Sunday FRANKLY HARVEY O’Lonhro – Rustie Bugles won the last race at Seymour at 40 to 1 and on Saturday O’Lonh Star O’Lonhro – Perfect Penny won in Hobart at 13 to 1 and in Innisfail Union Jukebox O’Lomhro – Elegant Rhapsody won the Cairns Hardware (Bm60).

Son of champion sire Lonhro from multiple group winning mare Mamzelle Pedrille. This record breaking Group 2 winner has inherited his sires outstanding looks and magnificent conformation so it is no wonder his progeny are performing on the racetracks. From limited numbers O’Lonhro has an amazing winners to runners strike rate of 45.1% with 19.6% placegetters. [51 runners, 23 winners & 10 placed]. With his best yet to come we look forward to the coming season to see his career continue to rise.

A powerful dark brown, near black stallion who could easily be mistaken for his 11 times Group One winning sire, O’Lonhro was so highly regarded by the powerful Hawkes stable that an international campaign was being considered.

A horse who is stamping his progeny with his own impressive looks and considerable presence, O’Lonhro hails from a prolific in-form black-type family.

Included amongst his close relations is I Am Invincible – 2103/14 Champion First Season Sire, sire of five stakes winners including Group One star Brazen Beau – and Group One Queen Of The Turf Stakes winner Diamond Drille.

O’Lonhro’s progeny are proving themselves to be tough and consistent and already he has sired the talented winners Social Media, Big Reel, Je Suis Priest, Little Capri, Union Jukebox and the exciting Singapore galloper Black Magic.

From his first 27 runners he has had 10 winners and 8 placed horses.

The champion son of Lonhro stands at Larneuk Stud this spring at a fee of $5,500.00