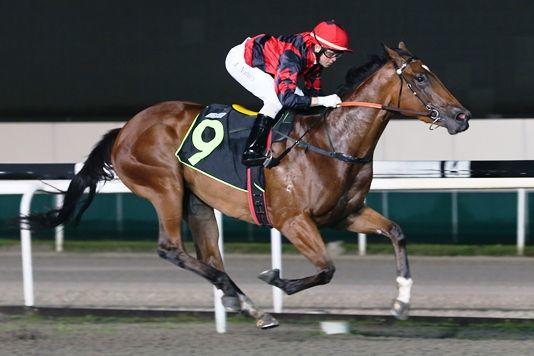 Filibuster Bounced out of her outermost alley (10) by jockey Manoel Nunes, she darted straight to the lead where she took control of matters, even enjoying a breather midrace before parting company at the top of the straight.

Crown Gift (Benny Woodworth) tried to keep up with the fleet-footed filly, but could not quite match her strides. It was $146 longshot Destroyer Eclipse (Craig Grylls) who in the end cut back a little on the margin to run second three and a half lengths away with Crown Gift third another half-a-length away.

“I’d like to thank the two Singapore Turf Club starters John Pepe and Damien Kinninmont for the enormous job they have done on her at the barriers, as well as my assistant-trainer Tim Fitzsimmons, and my track riders Sabri and Shafiq.

“It’s taken weeks and months – three months all-up – to get her right, and for her to win first-up when she is still so green is a big positive.

Nunes said he had not jumped aboard Filibuster in trackwork but was given the low-down from Brown and fellow jockey Michael Rodd who rode her once in a barrier trial.

“I had a chat with Michael and Cliff. They told me she has been a problem at the barriers, but she had a lot of ability,” said the Brazilian jockey.

“She was scratched at the barriers at her last start. The boys know her well and have done a great job with her.

“After only 50m, she was very green and she stayed like that for most of the race, but she is a very nice filly.”

SING R7 No9 Black Magic O’lonhro x Bent Zena has won S$87,914.00 and had a change of trainers a few months back and we are all waiting to see the result of the change.

Knightsbridge have several horses in preparation under the watchful eye of Larneuk Stud that are aimed at Singapore Racing. “Singapore Racing is a focus for us at Knightsbridge, not only is it close to our HQ in Bangkok but it is quality racing and open to ownership unlike Hong Kong” John Heffernan of Knightsbridge said.